Sony Xperia X Becomes The First Non-Google Smartphone To Get Android 7.1.1 Nougat: Sony’s developer team stated in December start that providing Android 7.1.1 Nougat for Xperia X is their “number one priority”. Maintaining the same goal they released the first Concept Android build for Xperia X in November start after that they released few updates also. Those updates were meant to give customers the first experience of latest updated software.


Today Sony’s developer team has achieved the goal of being the first non-Google company to release Android update which was based on Android 7.1.1 Nougat instead on Android 7.0. Even if it is not the stable build of Android 7.1.1 os but still is a great news for Sony mobile users. 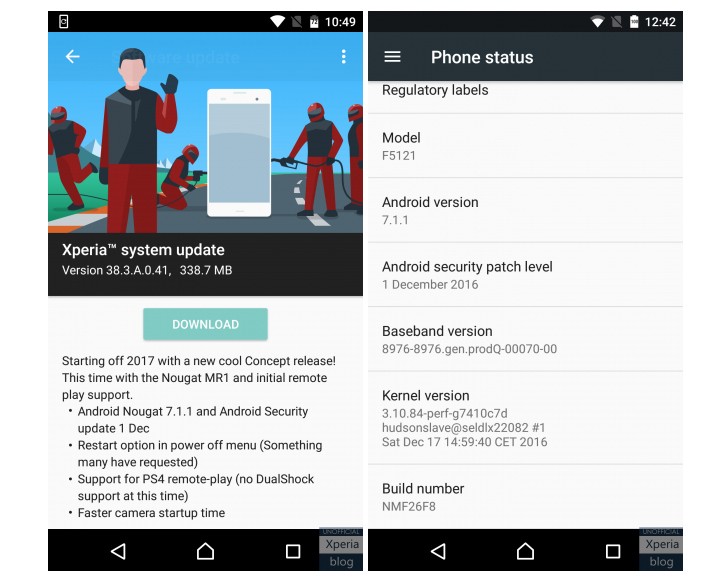 Before the release of Android 7.1, the Sony’s developer team had the source code available to them. Company developers quickly pushed Android updates to compete with Google but were waiting for the updated Compatibility Test Suite from Google. Now it looks like Sony has made the final build as many Sony Xperia X users have reported that they have received the Android 7.1.1 OTA update.

The only eligibility criteria to receive this OTA update, the user needs to be the part of Sony’s Xperia Concept Program. The update is designated as the firmware version 38.3.A.0.41 and Android build number is NMF26F8. One of the biggest changes in latest Android 7.1.1 Nougat is the Restart button in Power Menu, support for PS4 remote-play, and faster camera startup time. Soft Restart button will surely help in the development of no-physical button smartphones in near future.

How to be the member of Sony’s Xperia Concept Program?

Well, if you downloaded the previously downloaded and installed the Android Concept updates and chosen for Experimental Update track then you are already eligible to receive Android 7.1.1 Nougat update.

We are still waiting for user’s feedback about this latest Android 7.1.1 update released by Sony. We will post our hands-on review for Android 7.1.1 operating system soon enough. Stay tuned and share with your friends who owns the Xperia X.