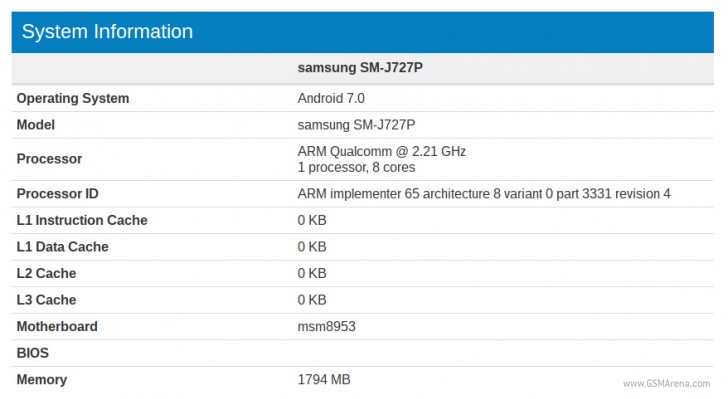 The Samsung Galaxy J7 2017 got leaked when someone got hold of the device and run the Geekbench 4 test on it and due to which its specs got listed on the benchmarking website. According to the Geekbench listing, GalaxyJ7 2017 will be powered by an Octa-core Qualcomm’s Snapdragon 625 SoC along with 2GBs of RAM. The processor is overclocked at 2.21GHz will most probably have Cortex-A53 CPU. The chipset also has built-in Adreno 506 GPU.

Its predecessor Samsung Galaxy J7(2016) also had the same RAM space, but the processor of Galaxy J7 2017 is improved in comparison to previous Qualcomm’s Snapdragon 617. It is also mentioned in the leaked specs that J7 2017 will run Android 7.0 Nougat OS out of the box.

As per earlier leaks, the Samsung Galaxy J7 2017 may feature a Super AMOLED full HD 5.50-inch display with a resolution of 1,080 x 1,920 pixels. Rumors also suggested a 13-megapixel camera in the rear and 5-megapixel shooter in front for selfies. The smartphone is expected to have a battery of 3,000mAh capacity.

Some 3D renders also got leaked a few days back which suggests an improved and more attractive design. If we believe that these are the actual images of the prototype then there will be a metal strip at the back panel through the rear camera and flash LED. Also, the Power button is provided on the left edge and the volume button is on right side.