Now upcoming Moto XT1650 smartphone was spotted on the Geekbench benchmarking platform along with key specifications. It could be the sequel handset of Z model dubbing as Moto Z 2017. It could be launched alongside the Samsung Galaxy J7 2017 which is also expected to be launching at MWC 2017. According to Geekbench listing data, Moto XT 1650 will be powered by Qualcomm’s latest Snapdragon 835(specifically 1.9 GHz Octa Core Qualcomm MSM8998 SOC) chipset backed with 4GB of RAM. 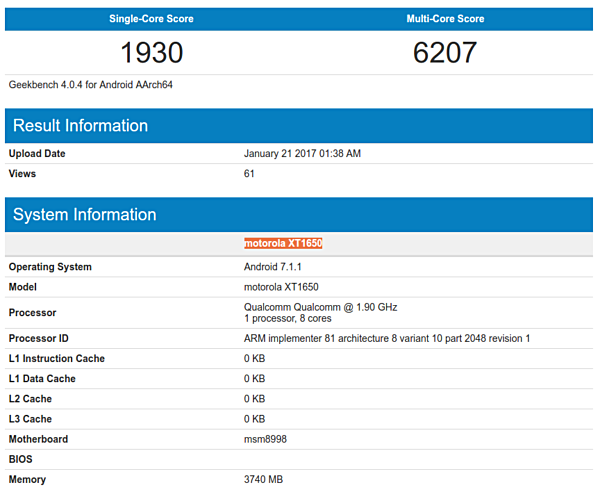 Listing data also reveals that the Motorola XT1650 will run on Android 7.1.1 operating system out of box. Snapdragon has been officially launched in the market but is yet to install on any device but is expected to come in Xiaomi Mix Evo, Surface Phone, and Samsung Galaxy S8. Unfortunately, we don’t know much about this flagship handset as of now but we can safely assume above model (XT1650) to be the well Moto Z (2017).

Moto G6 Plus Appears On Geekbench With Snapdragon 660, 4GB RAM