It has always been frustrating to stick to the socket while charging your smartphone. Have you ever thought of the day when you don’t have to stay stuck to the charging point instead of getting your smartphone charged while wondering around in your room? Well, scientists at Disney Research have devised a method of charging the gadgets without using a USB cord or electrical cradles. Using this method you can power a number of devices including fans, cellphones, and lights simultaneously. 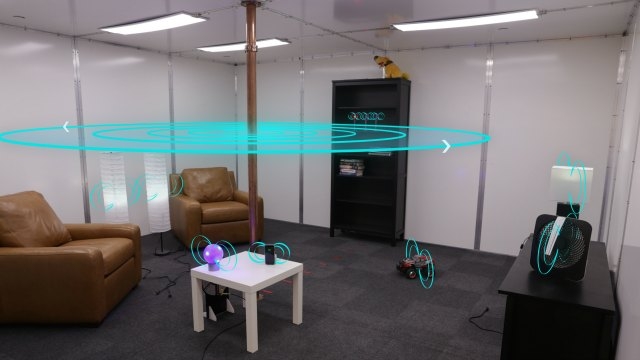 Now You Can Charge Electronic Devices Through WiFi Anywhere In Your Room: Quasistatic Cavity Resonance (QSCR)

This new method is called Quasistatic Cavity Resonance (QSCR) and has been successfully tested out during recent trials. During these trials, the research team generated near-field standing magnetic field. These field waves instantly filled a 16 ft x 16 ft room and started charging standard electronic gadgets inside the room. The only catch here is that the room should have metalized walls, floor, and ceiling.
In the recent trial, the scientists generated the magnetic waves which were sufficient to charge several smartphones, operate fans, and glow few lamps at the same time. They managed to transmit 1.9 kilowatts of power, which is sufficient to charge 320 smartphones simultaneously.
“This new innovative method will make it possible for electrical power to become as ubiquitous as WiFi,” said Alanson Sample, associate lab director and principal research scientist at Disney Research in the US. “This, in turn, could enable new applications for robots and other small mobile devices by eliminating the need to replace batteries and wires for charging.”
Alanson Sample also said, “We’ve demonstrated room-scale wireless power, but there’s no reason we couldn’t scale this down to the size of a toy chest or up to the size of a warehouse.”
Wireless charging is not a new idea at all, rather it has been a long-standing dream. The first time, Nikole Tesla demonstrated a wireless lighting system in the 1890s and proposed the idea of long distance power transmission without wires but it never came into existence.
Till now we have been able to transmit power wirelessly to very short distances like charging pads or stands. But with this new technology, the transmission distance can be increased to multiple times.
The Quasistatic Cavity Resonance (QSCR) technique researchers channeled electric current through the metallized walls, ceiling, and floor of the room. It generated a strong enough uniform magnetic field inside the room that can be easily intercepted by the receiving coils that are designed to operate at the exact same resonant frequencies as the magnetic field. The induced current inside these coils then channeled through discrete capacitors, which blocks the harmful electric currents.
“It is those capacitors that set the electromagnetic frequency of the structure and confine the electric fields,” said Matthew J Chabalko, from Disney Research.
Any device working at that low frequency can receive power from this magnetic field almost anywhere inside the room. Sample claimed that in future it will be possible to reduce the need of the metalized room and instead might only use a thin metal coating on walls. The study is published in the PloS One journal under the title of “Quasistatic Cavity Resonance for Ubiquitous Wireless Power Transfer.”
The study appears in the journal PLOS ONE.